The BMPT Terminator is the Chimera's equivalent to a main battle tank, capable of engaging all forms of enemy units once upgraded.[1]

As the Terminator is a multi-role armored fighting vehicle built on the lighter and much more-prolific T-72 tank chassis, it lacks the resilience of the US M1A2 Abrams. However one can argue that such is more than made up for through their formidable versatility. This is seen through global upgrades adding an automatic grenade launcher, anti-tank missiles, and anti-air missiles.

At present players can field this unit without fear of being entirely outmatched by an enemy, with the exception of going toe-to-toe with the Abrams tank and artillery. As such it is wise to deploy Terminators as the backbone of one's main combat forces toward late game.

It's important to point out though, that while good at many roles, this vehicle will never be as expectational as dedicated units filling a similar role. Because of this players will find it wise to bring along other units in an attack, to provide extra support for specific situations and possess additional tactical flexibility. 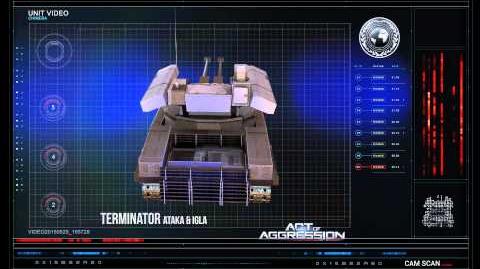