Edit
watch 01:36
We're Getting Mutants in the MCU - The Loop
Do you like this video?
Play Sound

The Spectre Strv 2000 is the stealth main battle tank of the Cartel. The Spectre is a combination of the Swedish and the Polish PL-01 Prototypes.[1]

The Strv 2000 was a supertank of Swedish origin. Development studies were conducted in the 1980s, to determine a possible design for a Swedish tank for the next millennium the design that was developed the furthest was armed with a 140mm and a 40mm coax. The Cartel design in-game seems to be a continuation of the basic idea but further updated with reduced signature technologies reminiscent of current concept vehicles and with the autocannon being mounted on a RWS.

Spectre seen in the teaser trailer 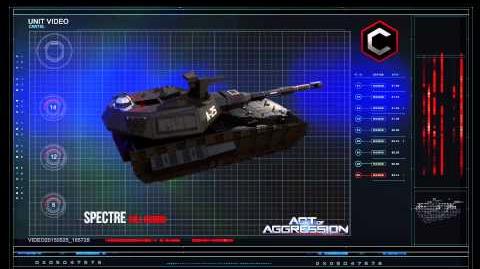