It is no secret that Act of Aggression will make you travel through time, and more specifically to 2025 when the game is set. But the game will also make you travel worldwide, jumping from Asia to Central America, Europe and North America.

To do so, 3D modelers and level builders worked together to create specific environments that would make you recognize the region you’re in at first glance.

In the first place, the 3D modelers’ team led by producer Julien Elma worked on hundreds of props, that is any object used to create the environment, from trees to buildings, roads to stickers (these 2D textures you apply to the ground or the walls).

In the end, about 500 props spread over four sets were made available to create maps taking place in the different environments required by the creative direction. Furthermore, each prop is available in three different models, depending on the zoom level … and even three more when such object is supposed to be destructible (one destroyed version for each zoom level!).

Since some missions are taking place in actual places, the team had to model famous landmarks.

For instance, in an early solo campaign mission, you will have to secure the ICC (International Criminal Court) building in The Hague (Netherlands). A challenge for the 3D modelers, as Julien explains: ‘We had to make this existing place playable, yet fitting within the game scale. We had to find the balance between realism and playability. Had we modeled the actual building as it is, it would have occupied all the screen space. So we had to make it both immediately recognizable AND fun to play with‘.

Another example is a big highway toll gate you will have to hold. ‘This model was made by gathering several influences. So that when you play, you have the impression of an existing -although a bit surreal- place’.

With this material, the level builders’ team, led by associate producer Saïda ‘Siam’ Mirzoeva created all the maps you will play in.

Level building is the delicate step where you transform the game and level designer’s directions into a real playable map. The job of Jérémy Willmann and the level builder team was then to make you feel like being in a credible location, although realism should not prevent the map from being fun.

Let’s take the example of a multiplayer map called ‘A River Runs Through It‘.

The level building’s work is based on a game design document indicating the shape of the map, the height grounds (e.g. the presence of different elevations), and the location of the rivers, roads, starting points, banks and resources fields: all gameplay elements. 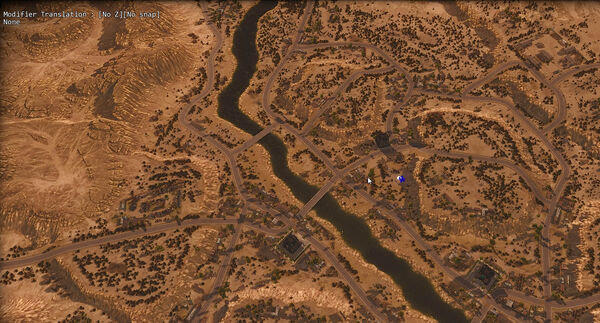 Once all these elements are integrated, the rest of the map is then created using all the visual elements (props) supplied by the 3D team.

The level builders will put together several elements to create ensembles called patterns, such as farms, residential areas or street roads. And then organize all the space. 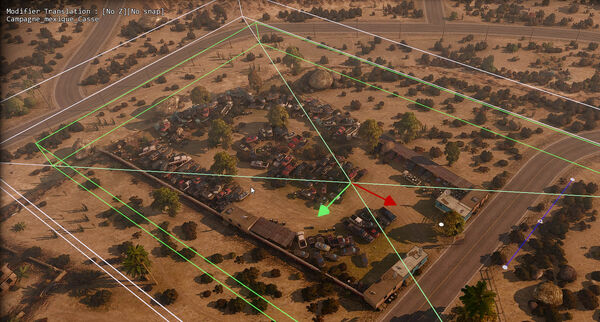 Since ‘A River Runs Through It’ was meant to take place in Central America, Siam reveals that the main inspiration was the city of Chihuahua. ‘We have spent time on Google Street View, studying city maps to permeate ourselves with the town planning, its architecture, how the citizens live there. We looked at all the little details to make our map follow the same construction logic.’

The level builders’ job not only consists with playing in a big sandbox, but also make all the world consistent, from the color of the hills to the implant of trees and cacti, the orientation of the sunlight, … And not only from one side to the map to the other, but in the whole Act of Aggression‘s universe as well.

This way, from one end of the Earth to the other, you immediately feel in a Eugen Systems’ RTS.