Edit
watch 01:36
We're Getting Mutants in the MCU - The Loop
Do you like this video?
Play Sound

The SAS sniper (short for Special Air Service sniper) is the sniper infantry and anti-vehicle infantry unit of the Chimera.[1]

The SAS uses an anti-material sniper rifle to inflict heavy damage on both infantry and vehicles. This makes the SAS a strong early-game unit as the Chimera lacks an anti-armor specialist infantry to quickly neutralize enemy vehicles. This strength, however, is balanced by a relatively high cost, low hit-points, long build time and relatively slow movement speed.

When found the enemy 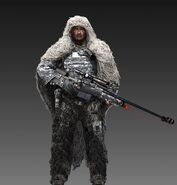 SAS in the Chimera gameplay trailer