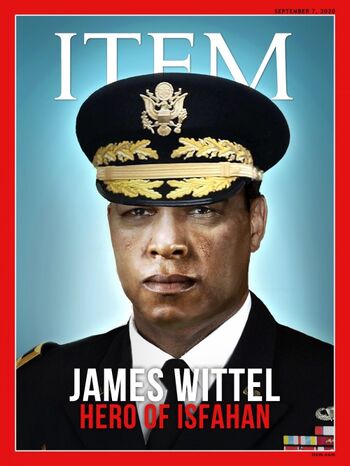 The White House Press Secretary has confirmed this morning the rumor going round Capitol Hill since the middle of the night: Iran is suing for peace.

Going through the intermediary of the Indian government, the Iranian Premier has asked for a cessation of fighting “in order for American & Iranian representatives to meet and discuss” a possible end to the war raging for almost three years in the Persian Gulf.

The “Third Gulf War”, or “Persian War” with the involvement of Iran, has come to be more commonly dubbed the “Forever War”, in direct reference to Joe Haldeman’s novel. Started in 2003 with the second US invasion of Iraq, the American war in the Middle East is now in its 17th year, despite several attempts to pull out from the country.

The Second Iran-Iraq War started with the Iranian invasion of the Iraqi province of Basra, on September 7th, 2016. The Iranian government had hoped to seize the oil fields and petrochemical infrastructures, but such a move only triggered an UN-sanctioned intervention. Involving American, British, French, Polish & Canadian troops, operation “Liberty Storm” liberated the Basra province after two months of fighting.

In the wake of the Iranian rout, Baghdad attempted to turn the situation to its advantage by pushing its own troops across the border. Tehran’s answer was a mass-levy of “volunteers” to stop the invaders. Although no other coalition members agreed to commit their forces outside of Iraq, US troops reluctantly went to war with Iran in support of its unprepared Iraqi allies. 2020: Persian War 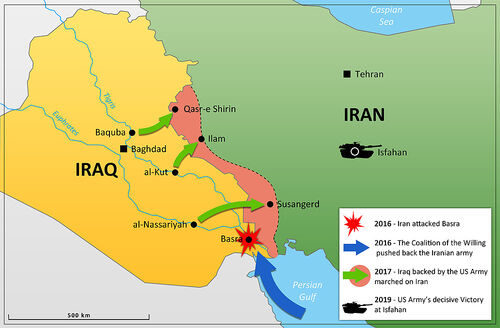 A HERO IS BORN

The Iranians met the invaders with everything they had, and soon the Iraqi army collapsed. From a purely logistical and air support operation, American involvement escalated quickly over the years 2018-2019, with more and more boots being sent on the ground.

Brigadier-General James T. Wittel rose to fame during the Iranian Army’s surprise offensive of February 2019, as deputy commander of 4th Marine Division. Recently reassigned from reserve to active duty, this outfit deployed in a supposedly quiet sector had been identified by Tehran as the weakest link in the US frontline. The Iranian offensive came after a well-timed series of terror attacks against key American infrastructures and command posts. When his commanding officer and most of his staff were killed in a suicide bombing, gen. Wittel managed to quickly reassert command over the division, and prevent the main Iranian offensive to overrun its position.

Not only did his gallant defense foiled the Iranian plans for a quick breakthrough, James Wittel was also able to launch a series of well-aimed armored counter-blows which broke the back of the Iranian offensive. Confirmed in command of the 4th Marine Division, he spearheaded the 2019’s pursuit of the beaten Iranians which brought the US Army halfway to Tehran.

Breaking from the conservative and limited approach of warfare which had prevailed in the previous decades, gen. Wittel’s daring plan was selected for the 2020 final offensive. Instead of heading straight for Tehran, as the Iranians anticipated, the American troops wheeled South, forcing the Iranian army to accept battle at the place of their choosing, near Isfahan. There, the US Army, with gen. Wittel’s own 4th Marine Division in the lead, trapped and destroyed most of the Revolutionary Guard, Iran’s elite troops.

Tehran’s offer for a cease-fire and peace talks arrived today, less than three days after the US flag was risen over Isfahan’s old royal palace. 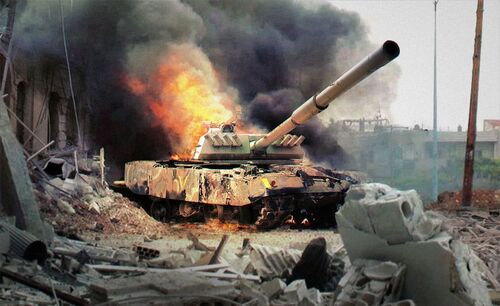 THE WAR MACHINE IS JAMMED

According to Lieutenant General Nathan B. Woods, former commander of operation “Liberty Storm“, the United States Army was “already stretched to its limits” by the time the Pentagon decided to support the Iraqi Army in Iran. Ongoing deployments were then already taking place in the South China Sea, Libya, Georgia and Sierra Leone.

Although praising the victory at Isfahan, gen. Wood is warning against what could be the “US Army’s swan song“. The United States won’t be able to leave an occupation force in Iran, unless “resorting to unpopular measures” such as “extending the combat service times” or “shortening the rest and refitting times” between tours of duty. According to gen. Woods, such measures would only be a temporary stop-gap, for vehicles and equipments, lacking proper maintenance time, are “already worn out today, (…) I can’t imagine in which state they’ll be had we kept fighting this war for even just six more months”.